Animated! 'Snarl' and Swoop. I'll dig out Grimlock later, get the gang back together!

Grimlock and Slash for scale!
Knock-out is the Best One™
Top

Got a PotP Grimlock through the post today. Glad he was only £25 new, T-Rex mode is...not great.

Bobbins from the side:

On the bright side, REX-ICAN STAND-OFF TIME!

Knock-out is the Best One™
Top

This week is going to be slightly mental as a lot of things I've been waiting for are set to arrive, both transformers and kamen rider related. Hopefully by Friday I'll be able to post a pic but yeah. Very exciting.
Top

RungLover69 wrote: ↑
Mon Feb 26, 2018 12:43 am
This week is going to be slightly mental as a lot of things I've been waiting for are set to arrive, both transformers and kamen rider related. Hopefully by Friday I'll be able to post a pic but yeah. Very exciting.

This is my awkward robot child now. SHFiguarts King Joe!


THIS IS A REALLY HUGE HECKING HAUL.

Meloetta, Cosmos and Metalhawk I all bought as a treat to myself on Saturday. I was feeling sad and I had to go to PC world to fix my laptop and it turned out there was a TRU nearby so I decided to take a look and I saw all three of these and I just could not stop myself. I'll give my thoughts later but man was I lucky to find 'em! Meloetta was down to five quid

The rest are a present from a friend of mine in the UK. We got talking about figuarts and how I'm broke and that's why I haven't shelled out on one yet and he figured he'd send me Fourze Fire States and CycloneCyclone/JokerJoker since he didn't need them. One thing escalated to another and he just ended up dumping in a ton of figures he didn't want anymore, including Classics Rodimus which he seems to hate with a passion! So yay! My Rodimus collection advances!!

That said, of Kamen Rider I've only seen Fourze, am watching Build and am halfway through W. I don't know who half these guys are. WHO ARE YOU
Top

I have no idea who any of them are either, but now I need to start a collection.

Also, I'm grumpy because my Kapow order got sent back by DPD, because apparently the Drop-Off point I selected don't like drop-offs. Bum-heads.
Knock-out is the Best One™
Top

That is an amazing haul and i have joint feelings of envy and a huge mass of excitement for you! Thanks for sharing!

Orbital Comics is the best!

Knock-out is the Best One™
Top Pair of bargain boys! Less than half usual retail cost for Overclocking and almost half price for Legends Megatron. Sure, Megs is a bit of a stiff, but he looks the business, has a great alt-mode and will look right smart once I get the DX9 upgrade kit on him. Overclocking is just bloody lovely. Nice heft to him, super poseable and just a wee smasher - he's my Blurr alright and will be getting that smashing Toyhax sticker set ASAP!

Just won a couple more bargain lads on the eBays, despite having no intention of buying any more robits this month, but I'd say Generation Toy Tyrant (IDW Stealth Bomber Megatron) for £77 and MMC Dicamus (IDW Roadbuster) for £40 was waaaaay too much of a no-brainer for me to say no to! Well, my phone camera has decided it's not going to cooperate with me (after I spent like fifteen minutes setting up a good shot, smh) but I keep forgetting to post about my latest and I don't wanna forget again, so I guess I'll just edit pics in later.

Anyway, I've been enjoying the heck out of the Victorion set! Even Jumpstream, who is easily my least favorite mold of the lot (though she's got probably my second-favorite deco in vehicle mode). Rust Dust is my favorite deco, root and alt-- I love the black they used for her and I'm glad Victorion got a good dash of it too-- and it's fun making her hold her teammates' comparatively over-sized weapons. I still find combining them a touch nerve-wracking, not that I could say why, but also pretty fun. Their weapons are gorgeous, especially combined into one. But then I'm a sucker for teams whose weapons combine; I blame growing up with the Power Rangers, haha.

I also picked up Titans Return Stylor & Chromedome recently. Honestly, it mostly a pity buy; poor guys have been the only TR merchandise left in my store for months. Went down to five bucks recently and I figured I may as well. That said, I dig them so deep. Great in-hand feel and fun transformation-- intuitive too. I had no need of the instructions. I like Stylor more than I expected. I thought I was going to just ignore him as anything but Chromedome's head but, Idk, there's something about him. I do still forget about him most of the time, I admit. Like, in my mind, it's still Chromedome on my bookshelf, fighting with Seaspray over the one romance novel I own.
Top

A was sent some bots from the US! 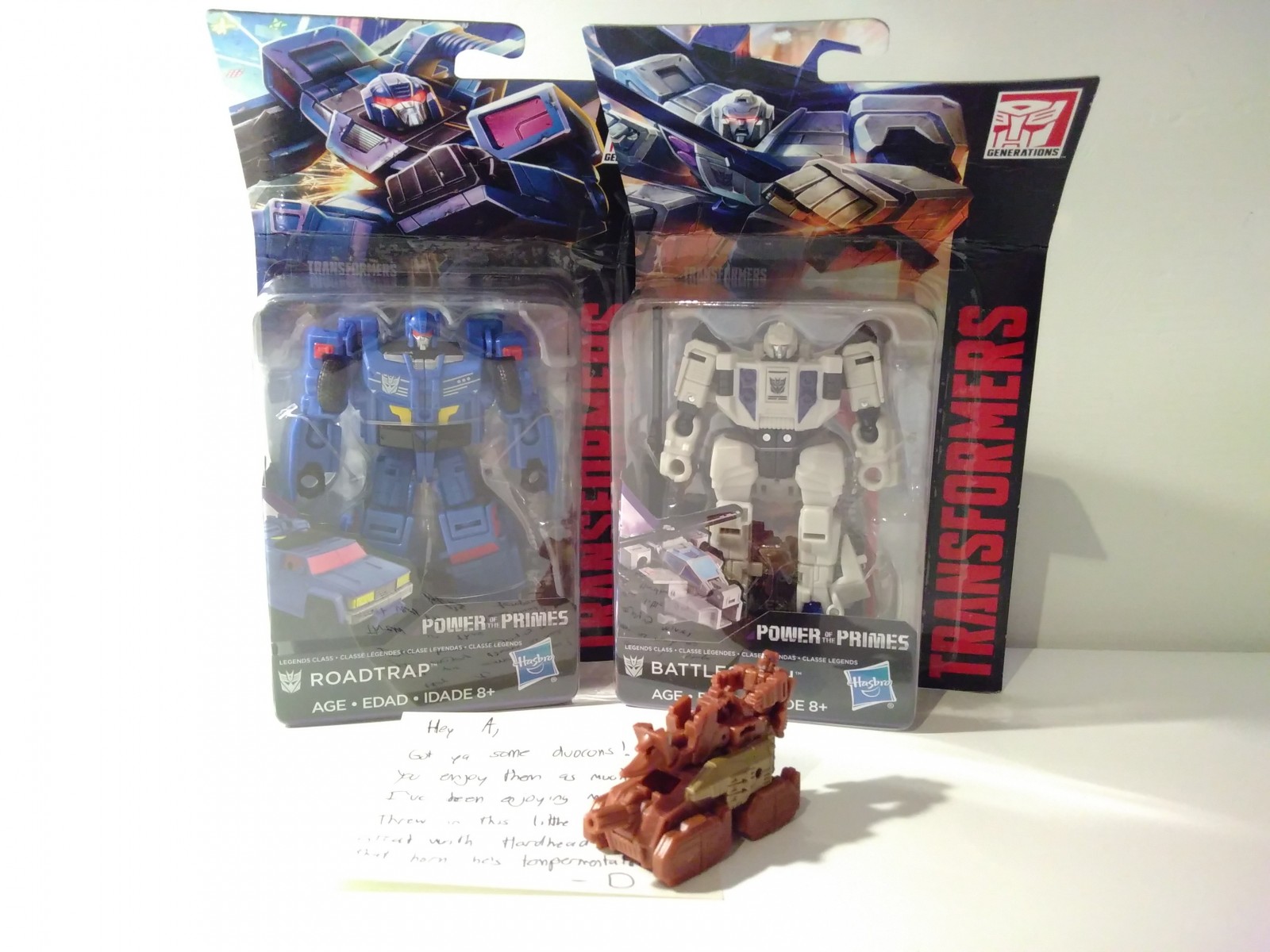 He has arrived!! Beautiful in very aspect - heft, plastic, transformation, packaging - still can't believe I got him so cheap. Dicamus should be here soon too Wave 2 deluxes are in the house!

That guy from Minnesota who likes Jetfire and collects Transformers